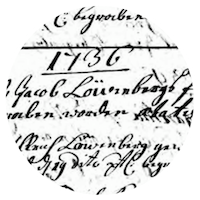 Lost in translation? Are squiggly lines, ink blotches and funny looking letters giving you the blues?  Handwritten German and even old German type can be difficult to read but I’ve got you covered! 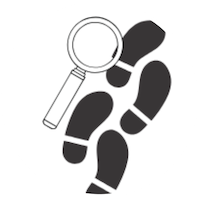 Has your genealogy trail gone cold?  In need of an on-site detective?  Many German-language records, especially those found in churches, have not been digitized.  If you need boots-on-the-ground to pick up the trail, I’m your gal! Experience the adventure of researching your ancestors from the comfort of your living room!  I will visit churches, town halls and archives in the quest for more information about your ancestors.  My journey will be documented for you via photographs and, where they exist, documents translated for you into English.  For the truly adventurous, I can customize an itinerary that allows you to experience the world of your ancestors first-hand! 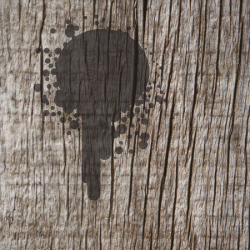 Tintenflecken means ink spots or ink splotches in German.  Old German documents are filled with ink splotches and blobs thanks to the use of fountain pens.  However, Tintenflecken also helps bring to mind one of the most famous ink splotches in German language history.  Luther lore has it that while translating the Bible into everyday German, Martin Luther threw his ink well at Satan to keep him at bay.  His throw left behind the famous “Tintenfleck,” still barely visible on the wall of his small study at the castle Wartburg where Luther completed one of the world’s most impressive works of translation. 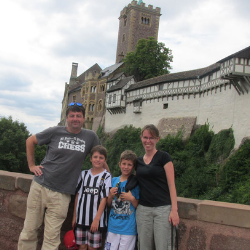 Amy Koppe has degrees in German (4.0 GPA) and International Studies as well as a master’s degree in education.  Her family has lived in the United States and in Germany and speaks German and English at home.  They have family ties to Thuringia (Thueringen), Bavaria (Bayern) and Schleswig-Holstein, representing a wide variety of dialects and cultural experiences.

Amy has experience translating many documents including:

Historic documents hold the key to your genealogical research – but only if you can read them! I can decipher typeset, Fraktur (old German typeset), and old German handwritten script. Send me scans or photographs of your documents and I will provide you a synopsis or a word-for-word translation (your choice).

The following services are available:

Experience the adventure of researching your ancestors from the comfort of your living room!  I will visit churches, town halls and archives in the quest for more information about your ancestors.  My journey will be documented for you via photographs and, where they exist, documents translated for you into English.  I am currently building my travel calendar for 2022.  Please send a request for me to visit the town of your ancestors!

For the truly adventurous, I can customize an itinerary that allows you to experience the world of your ancestors first-hand!  We can work together to customize your trip to the German-speaking world including stopovers in the towns of your ancestors.  I am also available to translate for you while you are in the country.

My parents immigrated from Germany after WWII. Several years ago, shortly before she passed, my mother made known the existence of dozens of letters my father had received from his uncle. His uncle had emigrated to America in 1930 and wrote my father in the years before Hitler rose to power and after the war. My mother thought she should just throw out the letters because the cramped, single-lined, script seemed to be a specialized derivation from standard German penmanship. No one in our remaining family could read them.

Fortunately, I urged her to keep the letters. After she passed, we asked Amy Koppe to look them over to see if she could decipher the elaborate script. She could and did–over five dozen letters. Her translation opened the window to my family’s emigration to America. My brother and I treasure those translated pieces of history.

Amy Koppe taught German in one of our area’s local high schools for a number of years, immersing students in the language and culture of Germany, including numerous trips overseas. If she can read specialized, early twentieth century German script, she will do an outstanding job in decoding most any German text.

An excellent grasp of the language, context and history make Amy an invaluable resource in my genealogy research.  She has translated more than 8 German documents for me dating from the early 1700s through the mid-1800s.  She is very thorough, efficient, and I could not be happier with this service. Highly recommend!

My grandfather was born in Pomerania. He served in the German military for three years prior to emigrating to the United States in 1888.  For years I have kept his very old military record in a box.  I tried to translate it, but could only understand a few words.  It consists of several handwritten pages.  Amy has provided me with a scholarly translation of these pages, and there are no words to describe how much this means to me.  It has given me a look into who my grandfather was as, sadly, I never met him in person.

I needed a last minute translation of a section of my master’s thesis and frantically contacted Amy to see if she could help me get it done. She knocked it out within 2 days and in that time even confirmed with other native speakers that her work was accurate. The section she translated was technical and contained scientific references that don’t have direct translations in German. She was still able to create a very readable and professional document that perfectly conveyed all meaning in the text. I am beyond grateful for her work and highly recommend her for any translating services!

Amy, I want to thank you on behalf of all of our family for assisting us it breaking through the brick walls we were facing on two separate lines of our German ancestry. Your professionalism as well as your passion has shown through time after time during our project. When you found things, you got as excited as we did!! Best wishes to you and your family in Germany. I’ve made a friend!!

Ready to talk about your project?